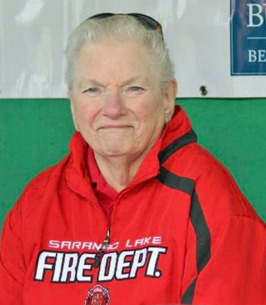 Born in Hartford, NY on April 13, 1937, she was the daughter of Clifford and Beatrice (Woodell) Durkee. Evelyn and her family moved to Saranac Lake in hopes of curing her father’s tuberculosis. Evelyn married David Martelle on July 30, 1955 at the First United Methodist Church in Saranac Lake. He predeceased her on March 9, 2004.

Evelyn would raise their 4 children while David ran a Sunoco station on River Street. In 1975, David and Evelyn purchased Gladd’s Delicatessen on Broadway. Together, they would operate Martelle’s Delicatessen (Dave’s Deli) until 1985. Evelyn would then be employed by the General Hospital of Saranac Lake, working in many different departments, doing many different jobs over the course of 36 years before her retirement. She is a past member of the Saranac Lake Volunteer Fire Department and Rescue Squad where she was once recognized as a top 5 responder for EMS. Evelyn was a member and Exalted Ruler of the Saranac Lake Elks Lodge and was a member of the Women of the Moose. She was an incredible bowler in her younger years. Countless number of Bingo games were played through her lifetime. Evelyn found a passion for reading in her later years. She would spend countless hours knitting baby sweaters and blankets that would donated to charities and baby hats that would go to local hospitals for newborns. She found tremendous joy in her grandchildren and was their biggest cheerleader.

Funeral arrangements are in care of the Fortune-Keough Funeral Home in Saranac Lake. At Evelyn’s request, there will be no calling hours. A graveside service with firefighter honors and bell ceremony will take place on Tuesday May 17, 2022 at 1:00 pm at the Harrietstown Cemetery in Saranac Lake with FR. Patrick A. Ratigan officiating.

Friends wishing to remember Evelyn M. Martelle may make memorial contributions to the Saranac Lake Volunteer Fire Department in care of the funeral home. Family and friends can also share their condolences and memories at fortunekeoughfuneralhome.com